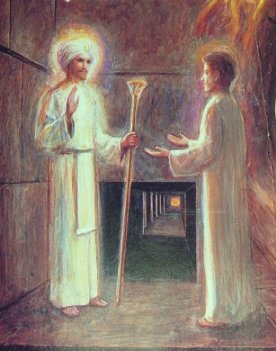 This article is written for those are taking the path of spiritual development, wishing constantly to improve yourself in God, to understand yourself and change. The others are not even advised to read. Certainly, everyone had to pass the stage which in Christianity is called baptism of water. But actually, those ceremonies, rituals and the purposes of the Orthodox Church don't have anything in common with this baptism absolutely for money. But there are a lot of people persons who wants their child to enter the heaven. But it is known that in the first decades of Christianity baptism was carried out by people who were not earlier than 30 years of age, as it was done by Jesus. Only after 30 years, all chakras can operate safely for the person.

Also it is necessary that personality or character of the person was quite definitive. There are enough examples when people who approach to the Doctrine of Life in their early years got tired easily and left away from the first obstacle which had on their way. But the person who has passed his life full of difficulties, doubts and spirit struggles, can be a reliable employee entering the Light Path.

The place of baptism is not important and the ceremony itself too. Baptism is a promise in your heart to God - to live with a clear conscience, “baptism is not the removal of dirt from the body but the pledge of a good conscience toward God”. (1 Peter 3.21)

All the text is written to be understood one of the most important steps onthe Way - to become a chela. Further, between the spirit birth and baptism of Fire there is a point when chela realizes that he has become different and has heard internally the gentle voice of his Higher "I Am" and doesn’t want to lose it. He understands there is a plan of evolution there and he wants to go through it, he wants to be an employee of God and nothing else can give him satisfaction. Finally, the chela decides to serve the common good and also he says in his heart that he is reconciled with the will and the law of God and is ready to serve Him. Thera miht be more than one reincarnation.

And certainly everyone hopes that he will be a chela. There is an important rule - the desire of chela must be sincere not egoistic, not for achieving secret knowledge and skills for personal aggrandizement. It seems to know the truth is the correct motive, but if it is egoistic it will be a great obstacle on the path of spiritual progress. Because the most true motive is growth of consciousness and service to all beings of this world. In addition the chela chooses the shortest path - the path of the heart. It is a pity, but a few people selec this path? because it requires the quality of devotion. It is necessary to demonstrate all the best qualities in daily life and simply to live by the law of conscience, instead of by human being laws.

And yet, a chela must introduce himself to follow the accelerated development - the Path of Initiation. Our Teachers of Wisdom don't look for chelas, but they always see on the causal plane in any point of the Earth when the candidate‘s heart lights of the fire love and compassion and ready to accept everyone who is worthy. There is no one who can’t be noticed. And during every embodiment it is necessary to pass again vital tests on the loyalty and devotion and in very difficult conditions in order to prove their readiness.

Yes, the Path is open and there are a lot of candidates, but a man who wants to approach the Teacher, must be as impersonal as they are and will learn to forget about himself, fully devoting himself to the service to mankind, as Teachers have done.

Aside discarding prejudices and fame
And prophesing the simple truth
I don't call Mahatma, Teacher is the same,
In whom me "myself" only triumphs.

Mahatma is the one who spirit light has understood,
Who passed this light from silence,
Whose heart is beating only for others,
For all the planet suffering a blood.

Teachers of Wisdom never accept chelas who possess of mental abilities: psychic extrasensory perception, clairvoyance, etc. The ability to see the astral plane is not a spiritual sight in fact. But these people consider themselves promoted on the Path. And the naive common human being believes that if a person does not have these abilities – he isn't a mentor. That is why there are a lot of false teachers abusing their abilities. Such animals as cats and snakes can see the astral plan, but they don't have Higher I Am at all. The influence of the astral plane is a very fatally affect for the spiritual development actually and contact with it is harmful, because polluted aura from astral contacts doesn’t accept higher energies

Only by the shine of heart and readiness for self-sacrifice it is possible to recognize a chela on the Path. And if you are meeting such a person who is the carrier of light aura, this meeting regenerates you and sometimes it is quite a single glance that will change you. The wise person is different from other by naturalness and simplicity first of all.

There are a lot of people attached to theosophy, the Teaching of Living Ethics - of Agni Yoga, to the Doctrine of the Ascanded Lords, that are all one and the same and already thereby reduce themselves for chelas of one or an other Teacher. But is it really done what has been written. Alas, many study the Doctrine only for development of occult powers. Do you remember the parable? One pupil came to the great Teacher and demanded a miracle: “After having the miracle I will believe”. The teacher smiled sadly and showed him a great miracle. The pupil exclaimed - “Now I am ready to pass under your hand the steps of the Doctrine”. But the Teacher showed him to the door, and said: “Now you are not necessary here any more”. To be a chela it is a great privilege, which it is shown not on the physical plane, but in the inner growth.

As there is an acceptance process in pupils, probably, many ask themselves such a question: "How is the process of chela reception"?. At various times it happens differently. Now when Lords try to preserve the physical platform of Earth planet there is no time to spend their precious time on children's performances in fact which take place in the churches, at the baptism ceremony for example. The true Initiation does not need any rituals, it takes place in the higher etheric octaves, when the Spirit of chela is ready and there is only his great Teacher is present at that. Teacher gives a part of his energy to his chela, directs his transmutation ray into chelae’s heart chakra, which will shine now not from case to case, but constantly giving equal light. The chela feels incredible happiness, but the Teacher takes upon himself the great burden of responsibility, setting with his chela the invisible contact. Since the Teacher knows what is happening to his chela, knows his every thought.

It is very unbearably painful for the Teacher every time when his chela shows poor-quality thoughts entering into illusion bog. It's not possible to express it in words it is necessary to feel one needs to become the Teacher. Nevertheless, still his chela did not understand all the responsibility that he has took, the Teacher lets know what he feels when the disharmonious vibrations are in his chela. The Teacher puts his chela in approximately the same conditions. This experience of the Teachers is simular to when your most favorite person has betrayed you, recanted from you.

What's good for the majority of pupils that such things as acquisition of life experience, experiments with illusion for the accepted chela is not allowed. He has only one choice, because he has reached the age of maturity and his karma responsibility doubles. From the moment when the pupil becomes a chela his life becomes different. From this moment some old bad qualities begin to come up , about which the chela did not know and which most likely would have remained hiding until the next reincarnation. Chela must not suppress these negative traits of his character by force of will, but burn them with the Fire of his heart.

No theoretical knowledge or any none organizations can give spirituality, but only passing through the full of illusion, partaking its venom and the ability to get out of it like a goose out of the water gives us the eternal treasures on heaven.