«It is a grand volume, a master-piece composed of clever, ingenious fables containing great verities; but it reveals the latter only to those who, like the Initiates, have a key to its inner meaning; a tale sublime in its morality and didactics truly—still a tale and an allegory; a repertory of invented personages in its older Jewish portions, and of dark sayings and parables in its later additions, and thus quite misleading to anyone ignorant of its Esotericism». Blavatsky H.P.

Look it up for yourself

"And it came to pass after these things, that God did tempt Abraham". (Gen 22,1)

"Thou shalt not hearken unto the words of that prophet, or that dreamer of dreams: for the LORD your God proveth you". (Deu 13,3)

"Let no man say when he is tempted, I am tempted of God: for God cannot be tempted with evil, neither tempteth he any man". (Jam 1,13)

The Church generally says that God sent the Devil to tempt mankind - which would be a rather strange way of manifesting His unlimited love for humanity!

"One generation passeth away, and another generation cometh: but the earth abideth for ever". (Ecc 1,4)

"and Adam and his wife hid themselves from the presence of the LORD God amongst the trees of the garden". (Gen 3,8)

"There is no darkness, nor shadow of death, where the workers of iniquity may hide themselves". (Job 34,22)

"Therefore Michal the daughter of Saul had no child unto the day of her death". (Sa2 6,23)

"and the five sons of Michal the daughter of Saul, whom she brought up for Adriel the son of Barzillai the Meholathite:" (Sa2 21,8)

"And no man hath ascended up to heaven, but he that came down from heaven, even the Son of man which is in heaven". (Joh 3,13)

From Earth to Heaven 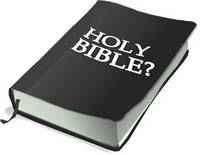 The Jews say that their Scripture is true, even holy and claims to be "divine." And this statement is naively accepted, tens of thousands believe in it only because they do not know the Bibles of other nations. One has only to study how the Bible was written, to compare it with other ancient sources of wisdom, as the argument just mentioned above, based only on blind faith, melts like ice in spring.

And the Hebrew Bible is just one branch on a tree, but for some reason it claims to be a body of tree.

It is believed that the modern Bible is a "translation of seventy elders" from Hebrew texts into Greek, which was made in the III-II centuries BC. This translation is called the Septuagint. Then, all translations were made into other languages.

«The Sanskrit letters are far more numerous than the poor twenty-two letters of the Hebrew alphabet. They are all musical, and they are read or rather chanted according to a system given in very old Tântrika works, and are called Devanâgarî, the speech, or language, of the Gods. And since each letter answers to a numeral, the Sanskrit affords a far larger scope for expression, and it must necessarily be far more perfect than the Hebrew, which followed the same system but could apply it only in a very limited way. If either of these two languages were taught to humanity by the Gods, surely it would more likely be the Sanskrit, the perfect form of the most perfect language on earth, than the Hebrew, the roughest and the poorest. For once anyone believes in a language of divine origin, he can hardly believe at the same time that Angels or Gods or any divine Messengers have had to develop it from a rough monosyllabic form into a perfect one as we see in terrestrial linguistic evolution» H.P.B.

Secondly, the fact of translation by 70 elders-translators is highly doubtful.

«He says that Ptolemy Philadelphus, desiring to read the Hebrew Law in Greek, wrote to Eleazar, the high-priest of the Jews, begging him to send him six men from each of the twelve tribes, who should make a translation for him. Then follows a truly miraculous story, vouchsafed by Aristeas, of these seventy-two men from the twelve tribes of Israel, who, shut up in an island, compiled their translation in exactly seventy-two days, etc. All this is very edifying, and one might have had very little reason to doubt the story, had not the "ten lost tribes" been made to play their part in it. How could these tribes, lost between 700 and 900 B.C., each send six men some centuries later, to satisfy the whim of Ptolemy, and to disappear once more immediately afterwards from the horizon? A miracle, verily» H.P.B.

As Kenealy shows, he is not noticed by Herodotus, nor by Pinto, nor by any writer of standing. It is most extraordinary, he says, "that the Jewish nation, over whom but a few years before the mighty Solomon had reigned in all his glory, with a magnificence scarcely equalled by the greatest monarchs, spending nearly eight thousand millions of gold on a temple, was overlooked by the historian Herodotus, writing of Egypt on the one hand, and of Babylon on the other—visiting both places, and of course passing almost necessarily within a few miles of the splendid capital of the national Jerusalem? How can this be accounted for?" he asks. Nay, not only are there no proofs of the twelve tribes of Israel having ever existed, but Herodotus, the most accurate of historians, who was in Assyria when Ezra nourished, never mentions the Israelites at all; and Herodotus was born in 484 b.c. How is this?

A famous Bible scholar mr. Horne writes: «We are persuaded that the things to which reference is made proceeded from the original writers or compilers of the books [Old Testament]. Sometimes they took other writings, annals, genealogies, and such like, with which they incorporated additional matter; or which they put together with greater or less condensation. The Old Testament authors used the sources they employed (that is, the writing of other people) with freedom and independence. Conscious of the aid of the Divine Spirit, they adapted their own productions, or the productions of others, to the wants of the times. But in these respects they cannot be said to have corrupted the text of Scripture. They made the text».

But of what did they make it? Why, of the writings of other persons, justly observes Kenealy: «And this is Horne's notion of what the Old Testament is—a cento from the writings of unknown persons collected and put together by those who, he says, were divinely inspired. No infidel that I know of has ever made so damaging a charge as this against the authenticity of the Old Testament».

Third, they created a completely invented humanized religion, led by their fictional "god" - Jehovah. Thus, these creators have brought hopeless confusion into the heavenly hierarchy. It is a shame for any person on earth not to know the name of his Creator.

The Bible is full of symbolism, allegory and was unambiguously written from Earth to Heaven but not vice versa. The people created the God by their own image, but they still want to subordinate Him to their will. Although for a long time the “Fiery Bible” was given from above to the mankind of the Earth, and if those who read don’t know anything about it, they simply haven’t matured with their consciousness. Like is attracted to like, and it is natural for people with a musty mind to drink "rotten water" from a source artificially made by a "saint." Only John's "Revelation" remained unchanged, everything else in the Bible is a church surrogate.

«And it is the same as when you dig out a well and use water from it. You get used to drinking the water from this well because there is no other place where you can get it. And even when the water after some time starts stagnating, you put up with this water for you don’t know how to find a new source. And here comes a new person who digs out a new well. You try the water warily because you know that the water can be different and sometimes it is even possible to get poisoned by it. Long time passes away, until all inhabitants get used to the new well and start taking water from it».