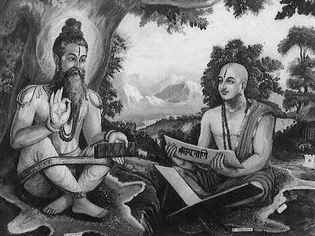 Gautama became a Buddha. He went from one village to another. It was a hot summer. He was walking along the shore. The sand absorbed his traces and kept them in silence.
And it happened that one great astrologer graduated from Kashi - the citadel of a great Hindu art of secret knowledge and was returning home. He became ideal in his predictions. And when he was coming back, he saw footprints on the sand. And, according to his books and knowledge, the footprints had to belong to Universal Monarch Chakravartin. "But why did Chakravartin go to a poverty-stricken village and still barefoot?! But the sand kept all the signs which were saying: “Either your science does not give a shit to anything, or you are a complete fool. I cannot just leave, I must find this person. May be it is an accident - the Master of Event was here!"
And he was following along the steps. At that time the Buddha was sitting under a tree. The astrologer came up to the Buddha and was mystified as ever! There was a King who looked like an almsman. With all his being that man was a King! But under the tree a threadbare beggar sat. Therefore, the astrologer said:
- Oh, I beg you humbly, dispel my doubts. You sowed discord in my heart. Fifteen years of my life I spent in Kashi and these fifteen years of my life I studied the secrets of predictions. And now, when I was graduated the title of All Vedas-mysteries, you have completely stolen my peace, my confidence in my science. Just tell me please: “Are you a beggar or you are Chakravartin, the King of the entire Universe, the Monarch of all things? In your response, my life is. If you are a beggar - I'll throw all my books into the river where you have walked along and I would go to serve as the last rank servant of someone, because I spent my life in vain. But if you are really Chakravartin – don’t conceal from me, Oh Great!”
Buddha opened his eyes and said:
- Your surprise and confusion were natural, but you just met with one of the tens of thousands. Regarding your remaining nine thousand nine hundred ninety-nine books they always will be true and immutable. It is only with respect to me your books are not applicable. But you should not get upset - you will not find anyone more, so don’t discard your’ books recklessly into the river.
The astrologer said,
- But what is your secret? How have you become an unpredictable one?! ?!
And the Buddha replied:
- Just I have always been attentive. I haven’t made the same mistake twice, I haven’t become a pattern. I am not a mechanism - I became a man, so you couldn’t predict me. The next time is not known at all –for you and for me – it is absolutely unknown. And no one knows what will happen.